The literacy rate in Pakistan 2022 province-wise for males and females has improved by 58% to 70%. With the special attention of the ministry of education Government of Pakistan in this section, we have overcome illiteracy. Now, about 22 million students are having easy access to schools and colleges which has improved the latest figure. Pakistan’s literacy rate latest figure is 72.5% for males and 51.8% for females which is almost 10% of the latest three years. Pakistan social and living standards measurement carried out every year but this year it cannot be conducted due to population and housing census. Every year, Pakistan’s economic survey reevaluates the figure which tells us the real efforts by Govt. on this section to secure the future of the upcoming generations. As far as education is concerned Pakistan is one of those nations which are left out in this area and are behind the majority of the countries of this world. Pakistan has one of the worst literacy rates in the world which is one of the very core reasons for the slow growth and destructive economy.

The survey published 2021-22 shows the Pakistan literacy rate at the static point. The primary level enrollment stayed at 54 to 57 percent in Pakistan females. While the stats for males have improved as compared to the latest three years. Overall 97, 462, 900 is the total enrollment rate of Pakistan where the 22650000 are primary enrollments and 2884400 are secondary while the 1949000 are for the post-secondary enrollments according to the new facts and figures.

In Pakistan, the educational expenditure is served by 7% of the overall GDP. According to Human Development Report 2018, the country is ranking on the number of150th out of 189 countries with a Human Development Indicator (HDI) value of 0.562. For the financial year of 2022, education-related expenditure increased by 5.7 percent. The figure after the calculation is Rs.699.2 billion in the financial year 2018 as compared to the figure of Rs. 663.4 billion for the financial year 2017. It is a federal figure but the contribution of provinces for annual development plans on education cannot ignore.  In the financial year of 2017-18, about 5.1 thousand higher secondary schools or inter colleges comprise 120.3 thousand teachers remain on the board. Higher secondary enrollment decreasing in the last two years.

In Punjab, the same primary level enrollment figure is 67.7%  percent. In Khyber Pakhtunkhwa, the figure rate is 55.3 % percent. The literacy rate in Sindh for 2018 is 62.2% and Balochistan with 55.5% percent of the whole public rate. These figures are according to the 2022 economic survey figures. The public expenditure on education has a direct impact on the educational system of Pakistan. The evidence came from 2.7 percent of GDP in 2018. Further, you can see on the chart of province-wise literacy rate in Pakistan 2022. 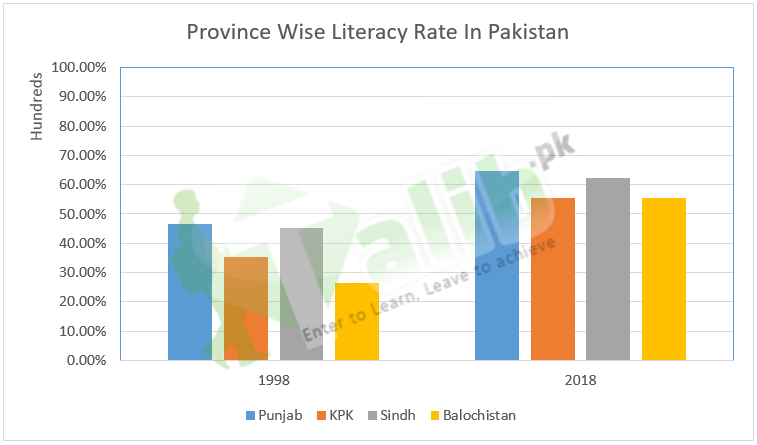 Debate About Trends of Literacy Rate In Pakistan

This is the average literacy rate of Pakistan because there are exceptional cases where the rate is very high in a few cities like the urban hubs which includes Lahore, Islamabad, and Karachi where the education persons are almost 75% and even above but when we move to the tribal areas where acquiring the modern education is considered to be un-Islamic by few religious extremists which have destroyed the level of education in such cities. Here the literacy rate is as low as 9% and even lower than this because females here are not allowed to go to the schools and the parents prefer their boys to work rather than going to school and having the education.

The above-given suggestions for KPIs for Pakistan’s literacy rate shall increase it with the desired figure. Education is the vital component for the success and development of any nation which is taken for granted and ignored in Pakistan which has resulted in the lowest educated people in the world. Unfortunately, Pakistan is ranked at 113th positions in the total 120 countries in literacy rate which is one big shame for the nation as well as for the administration of the country. It is not just a shame but a very alarming situation for the country because until or unless the number of literate persons will not be improved and consideration will not be taken for the improvement of education, the future of the country will be doomed to more problems and national issues.

In the consensus made in late 2012, it was being reported that the literacy rate of Pakistan is 56% which includes both males and females, and even the places which include all the rural and urban areas of the country. 56% to be the literacy rate is very low because still, it is almost half of the nation which is still illiterate and has nothing to do with the economy as they are contributing nothing in it because the major contribution done is through the education. 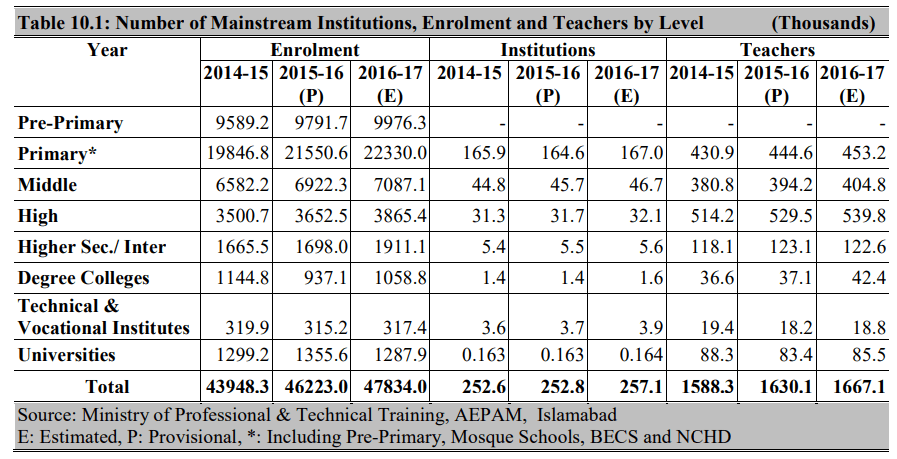 Education is a fey crucial aspect and is one of the factors which contributes the most to the development of the national economy and plays a vital role in the growth of the state. So it is the responsibility of the administration as well as the people of Pakistan to make sure that their children are having the education so that they can improve the literacy rate and ultimately the country’s situation and status will improve.

Education plays a pivotal role in the creation of skills and human capital. It leads to higher economic growth in Pakistan. Education is recognized as a fundamental right of people. Pakistan has achieved Universal Primary Enrollment considering it to go a long way forward to improve the overall education and literacy level. The government of Pakistan is committed to improving both quality education. The coverage of education through effective policy interventions. It deals with expenditure allocations. International commitments require political will to achieve EFA goals and MDGs.