The previous month, Federal Investigation Agency has opened a bundle of vacancies and thousand of the candidates have applied for jobs but till now they are looking for the FIA Physical Test Date 2021 Constable, ASI, Sub Inspector. On the other hand, those people who have applied for the post of Constable, ASI, and Sub-Inspector firstly will appear in physical test and then those people who will qualify in the physical test will appear in written test exam. So all the candidates are looking at the final date of the physical test. Further, when they will announce the exact FIA Physical Test Date 2021 Constable, ASI, Sub Inspector we will update this page for the guidance of the students.

Federal Investigation agency is going to announce the complete schedule of the FIA Physical test 2021 because as per some sources they will start the procedure of the test in the month of August. All the candidates start the preparation because if you will physically fit then you will select for these posts. On the other hand, those candidates who have applied for the post of Clerk, Junior Clerk, and steno typist will not appear in the physical tests as well as they will just appear in the written tests. 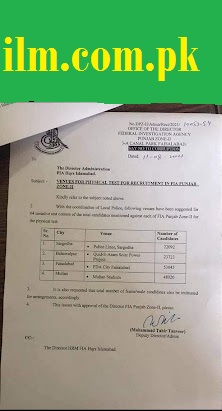 Till department has not announced the FIA Physical test date for the constable, ASI, and sub-inspector as well as hopefully they will start the test in the month of August 2021. Further, keep in touch with this page for the latest information about the physical test schedule.

FIA will take the test directly because some of the people think that all the tests will conduct through a testing service agency. So that is completely wrong. All the candidates will follow the FIA guidelines and appear in the test. FIA basically an investigation department that investigates high-profile cases like corruption and cybercrime. So in this year many of the people have retired from FIA and then they are going to recruit to the people for work. Across Pakistan bundle of people have applied and now waiting for the test date. FIA will enroll the candidates on a merit basis. After taking the test they will announce the final list for those candidates who will appear in the written test while other candidates who will not appear in the final list will consider out from this race. All the information about FIA Physical Test Date 2021 Constable, ASI, Sub Inspector is mentioned on this page.