KMU is going to issue the result of PECSO because many of the jobs were announced in Peshawar Electric Supply Company and the bundle of the candidates has appeared in the test. Further, KMU PESCO ALM Test Result 2022 Merit List and selected candidates’ information are here. Further, KMU has announced the result of PESCO and all candidates can check their names. Moreover, they have announced the answer key for the guidance of the students because sometimes students think that they were given the all-right answer. In addition, KMU PESCO ALM Test Result 2022 Merit List is now available on this page.

ALM jobs were not announced for a specific region as well across the province people can apply. So, KMUTS organized tests in different regions that as Abbottabad Bannu, Chitral, D.I.Khan, Dir Kohat, Mardan, Mansehra, Nowshera, Peshawar, Swabi, and Swat. Now, the Assistant Line Man result has been issued and all the candidates can check.

KMU has issued the PESCO answer key 2022 from this page. Those questions have come in a written paper now all the students can check their answers. So have a look down and gather all the answers. 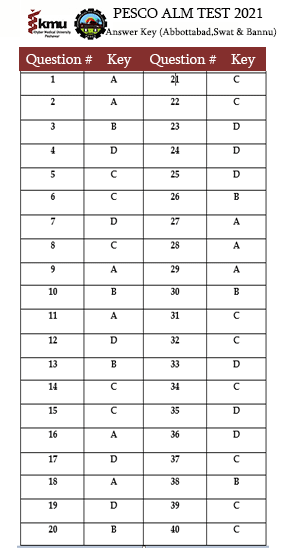 Candidates can check KMU PESCO ALM Test Result 2022 Merit List from this page. One most important thing is without merit lists they will not take any job to the students. Before announcing jobs they have announced the criteria of the selection and those students who will meet just those will join. Further, if they announce the interview schedule then we will update this page.