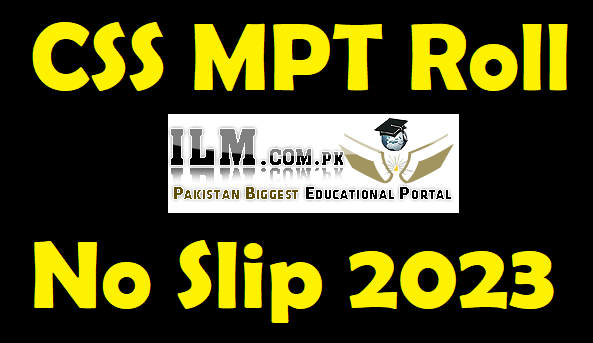 CSS Test organizes by the FPSC which is Federal Public Service Commission and when CSS jobs come then the recruitment procedure fulfills the FPSC. This year’s screening test that is going to organize on October 2022 will take the FPSC and all candidates will appear. In addition, applicants download the CSS screening test roll no slip and appear in the test.

How to get CSS Roll Number Slip

Some people find out how to get CSS roll number slips 2023. So no need to worry because FPSC has announced the roll no slip and all candidates can download it from this page. In addition, roll no slip is available on the official page of FPSC.

This is the complete information about CSS MPT Roll No Slip 2023 Central Superior Service. In addition, if FPSC will announce new info then we will update the students who are going to appear in the exam. Further, this is the right time to take the roll no slip because if you miss then you will not eligible to give the screening test. Furthermore, those candidates who will clear the screening test will appear in the written test. So for the purpose of a written test, they will generate a separate roll no slip. When CSS Written-test roll no slip will issue by the administration then we will share it on this page.