If you are looking for Army Public College Chinar Campus Murree Admission 2020 Form then you are here on the right page. Admissions are open from class 1 to 9th for boarders in the college so if you are also among those students who want to take admission could get the admission form by the given below process so read this article till the end as this will clear your all ambiguities regarding the admission process. This educational institute is not a new one as it is established in the year 1990 it was inaugurated by the chief of army staff of the Pakistan Army of that time Gen. Miraz Aslam Baig. In the initial stages, there were just two sections first is from class 1st to 6th and second is from class 7th to 10th then in the year 1997 with the positive response from the student college section were also started. This is the efforts of the faculty staff that have provided the quality education to a number of students at the Army Public College Chinar you could find a highly educated and experienced faculty for more information of the admission form, Entry test, and Interview Dates, result and commencement of classes read this article till the end. 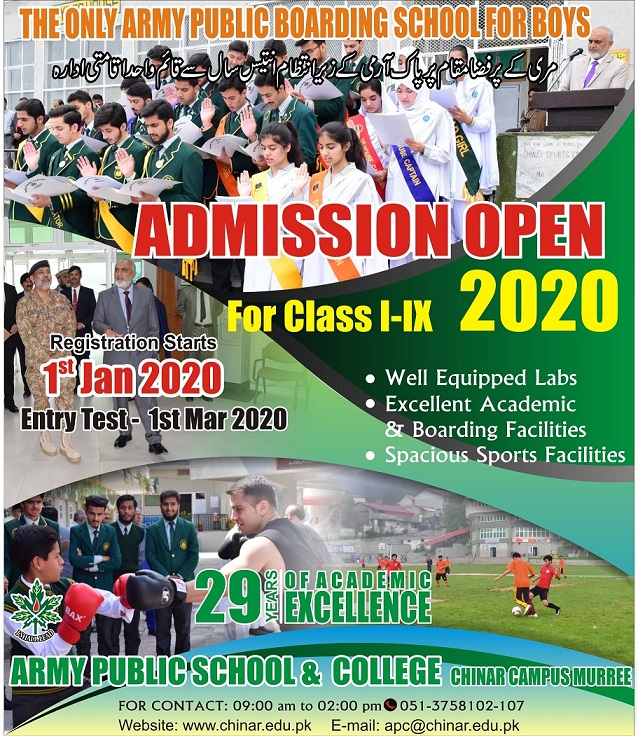 After the closing of the admissions, the entry test will be conducted on 1st March at the campus. All the candidates will appear in it and those who will pass it will be called for the interview. The selection for the admission will totally made on merit.
So, this was all about the admissions in APC 2020. If you also want to get admission, then apply now. There are limited seats in the college and those who will meet the criteria and will pass the test will be allowed to take admission. If you have any questions related to this post then ask in the comment section.

Ghulam Ishaq Khan Institute GIKI Undergraduate Admissions 2020 Form Last Date is open and here on this page all the information including Form, Fees...