King Edward Medical College 4 years BSc (Hons) Degree Courses Admission 2022 is now open for willing students. In this admission session of 2022 following are the programs which are offered by the University Medical Laboratory Technology, Operation Theater Technology, Imaging Technology, Anesthesia Technology, Hearing Sciences, Dental Technology, Orthotics & Prosthetic technology, Radiotherapy Technology, Renal Dialysis Technology, Psychological Sciences, Speech Therapy, and Cardiac Perfusion. King Edward is among one of the old and best medical colleges in Pakistan which is situated in Lahore. This is like a dream of every medical student who wants to be a doctor to study in King Edward Medical College so there is a huge crowd of students who want to take admission but due to a limited number of seats, only the lucky and hardworking student is able to study in this medical college.

King Edward Medical College has announced admission in BSc Hons and people can apply till December 2021 and after this date management of this college will not be responsible for your application. So just only that application will process who receive before the Last Date. While Hifz-e-Quran test will appear on January 2022 and the merit list will announce January 2022. 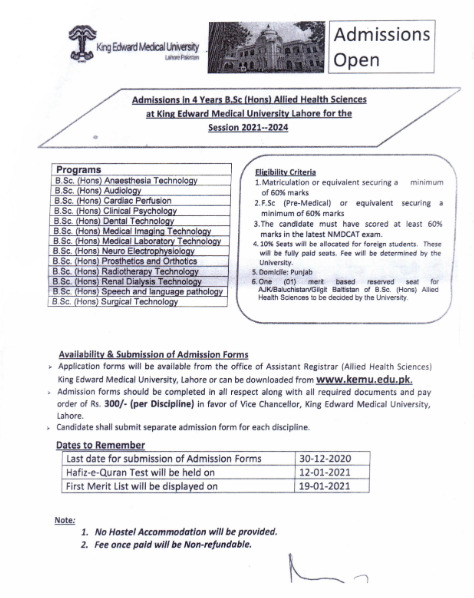 The number of seats is as follows:

King Edward medical university’s fee structure of BSc Hons programs has been mentioned on the official page of this organization as well as if you want more info then you can visit the admission where all information will provide by the representative of the university.

Application forms are available in the office of assistant Registrar (Allied health Sciences) King Edward Medical University and other than that this application is available here on this page.

Complete information with steps by steps has been mentioned and if you feel any confusion then you can visit the official site of this organization as well as admission will close after a few days and all admission will do on the merit base. So after apply people will wait for the merit list that will announce on January 2022.