Pakistan Air Force PAF Public School Lower Topa Murree Admission 2022 is open so download the Admission Form along with the Entry Test Result from this page so that is why candidates if you are really interested in taking admission in PAF School then the last date to apply yet not announce. As this is the last date to apply and all those applications which will be received after that date will not be entertained in any case. Students PAF Public School Lower Toppa Murree is one of the best Air Force schools in Pakistan that is the reason that whenever the admission advertisement is published in the newspaper to aware the students about the new classes session there are a huge number of admission forms received to the management from all candidates who are willing to take admission but due to limited the number of seats every single student is not able to get admission and to choose the perfect person among all who are really eligible to take admission School to arrange an entry test and the result of this entry test will decide that either the person is eligible to take admission or not. All the other detailed information is available on this page so do have a look down on this page and keep yourself up to date with all the latest updates. 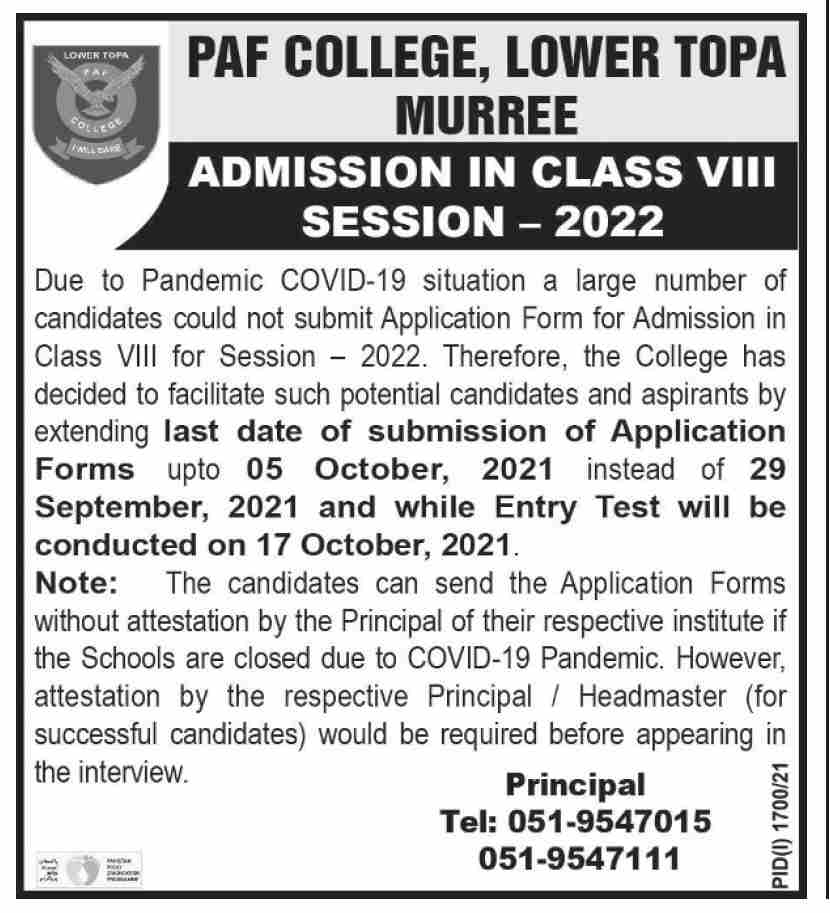 For the information of the students who are looking at the PAF Public School Lower Topa Fee Structure now, they would get from the admission office. Because fee structure does not exist online and fee structure will mention in the prospectus. Most important the criteria of the fee are totally different because if you army employ your children will take the education free of cost while if you are a civilian then you will pay complete dues.

PAF Admission Form is now available and you can download it. When students will send the admission form they must attach the bank draft because you will pay 1200 rupees prospectus charges in HBL bank.

All those candidates who wanted to take admission in the PAF Public School Lower Topa could appear in the written test that would be conducted in different cities including Rawalpindi, Lahore, Multan, Peshawar, Quetta, Hyderabad, Karachi, PAF Public School, Lower Topa.

The admission form is available in the prospectus which will be available from the 30th June 2022. So all those candidates who wanted to be a part of the PAF School could get the admission form by sending a demand draft of Rs. 850/- which is paid in the Habib Bank Limited Lower Topa Murree code no 17991. Only Habib Bank draft will be accepted as no other bank would be taken under consideration.

Kindly tell me how can I check my result

Kindly when the result for 8th class2016 will announce.