Balochistan Levies Force Jobs 2019 Quetta announced by the officials so that is why other complete information about the Job Advertisement Form Last Date will be available to this page. Balochistan Levies Force is a law enforcement agency of the Pakistan which is operated in that province only. Well almost 90% areas of the Balochistan are under the Levies force and other 10% are under the Balochistan Police so that is why every year they recruit new candidates to control the law situation in the province. This Year too the officials has declared the Balochistan Levies Force Jobs 2019 in different vacant vacancies that are listed below. One thing i would like to mention here is that if you are interested in joining the force then you need submit the application form before the last date as this is clearly mentioned in the advertisement too. 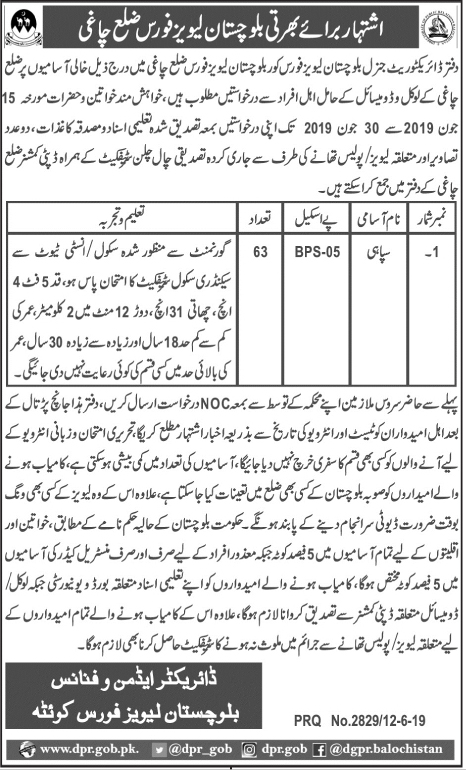 Balochistan Levies Force Jobs 2019 Form can be obtained from the Deputy Commissioner office of the district and the last date is also mentioned in the advertisement above. All those candidates who are already a part of any government organization can also apply but through a proper procedure and a NOC from the current organization. Candidates have to bring thier own Computerized ID Card along with the Domicile and the educational Certificate as required for each job vacant positions. No TA or DA will be given to those candidates who appear for the Written test or Interview in the Levies Force Jobs in Quetta.