Many of the jobs have announced by Pakistan Army as a captain but many of the people want to know how to apply. So all the procedure is going to mentioned in below. Further, Join Pak Army As Captain 2021 Registration Online Through Short Service Commission as the registrations are open from the officials. There would be no single person who would not have a dream once to join the army of Pakistan. Not just the boys but even the women have been witnessed with a great sum of passion and enthusiasm with the way of which they have the eager to move inside this sector. Talking little about the Pakistan Army it is all defined up to be the land-based service branch of the Pakistan Armed Forces. It came into existence at the time after the independence of Pakistan in 1947. In addition, there were around 500,000 reserves that are actually bringing the total obtainable troops to 1,142,000. This army has even put themselves in the involvement of the three wars with neighboring India and more than a few border skirmishes with Afghanistan. This is the main reason that today every single person wants to be a part of this sector just to serve up their nation at the best and sacrifice their life. In this article, you will learn about Join Pak Army As Captain 2021.

Just like every single year this year in 2021 as well Pakistan Army has opened up the short service commission course that is meant for the captain in Pakistan Army! Below we will be highlighting complete details about the course and the method for applying for it online! 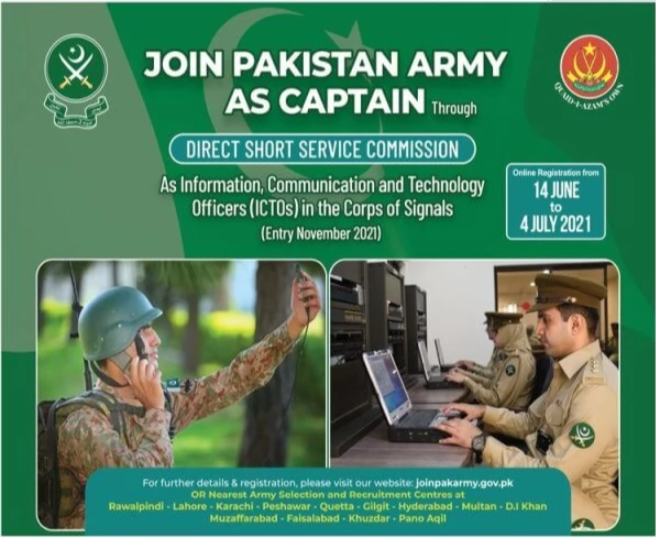 They will be giving away with the courses in various departments in which we have engineers, signal, electrical and mechanical. These Join Pak Army As Captain 2021 courses will be provided for the time period of 6 months.

For the information of the students who are going to apply in Pakistan army because recently many of the vocancise has announced by army department for the captain. So before apply one time must check the eligibility criteria of the application then apply online.

You can apply for its online by visiting the website of www.joinPakarmy.gov.pk. Plus in case of further details, you can visit the nearest cities’ army recruitment centers as well such as Rawalpindi, Lahore, Karachi, Islamabad, Multan, Gilgit, Faisalabad, Pano Aqil, Khuzdar, Abbottabad, and Dera Ghazi Khan.

So this was just information related to the Join Pak Army As Captain 2021 Registration Online! If you think you have the ability to serve your nation as being the army captain then just apply for it now and show the world what the Pakistani army is really!